The Wildcats are Dougherty's nickname, and their school colors are navy, Columbia blue, and silver. It is known for its state-of-the-art campus, which, under a joint-use arrangement with the city, features a performing arts center and aquatics center. Dougherty is the top school based on the Academic Achievement Ranking in the district. Over 200 clubs and several afterschool events are also housed in the school.

Shapell Industries of California and Windemere Ranch Partners BLC, who were also the two primary developers of the Dougherty Valley region in general, designed Dougherty Valley High School. Through a December 1988 agreement with the SRVUSD, Shapell was required to "contribute its fair share of the cost of additional high school space needed to serve students generated by the project," with the project cited as the construction of 11,000 houses in the area.

In comparison to the traditional approach of a developer and the government financing the school system for the building of any required schools, Dougherty is the first developer-built high school in the SRVUSD. In 2001, the district and developers started further discussions about the design of the academy.

The school's name was chosen from more than 150 suggestions sent to an online survey, but the Board of Education had to approve the name, school colors, and mascot. After winning a student logo design competition with 12 other entries, the school logo was designed in 2006 by Jennifer Wong, a senior at Monte Vista High School at the time. Wong won $500 for her concept and was celebrated at a school board meeting alongside the contest's runners-up. Denise Hibbard was chosen as Dougherty's first principal, who had been an assistant principal at California High School for six years. 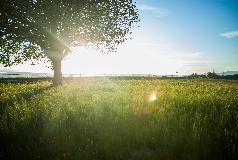